The years the Bolinger family spent in Sharpsburg, Maryland represent a significant period in the family history.  Johann Gottlieb (John G.) Bolinger and Mary Cronise (born March 17, 1820) were married there in 1838.  They had eight children.  Their children who survived to maturity and their dates of birth were as follows:

According to Find A Grave records, they also had four children who did not survive infancy:

Mary Cronise died Feb. 11, 1854.  Her gravestone appears below.  From fragments of the inscription that were readable, it appears that it said “For as in Adam all die, even so in Christ shall all be made alive.”  I Cor 15-22.  The headstone was engraved by “J.A. Snyder, Rohrersville, Md.”

It appears that the first member of the family to move west was the oldest son, George Washington Bolinger.  According to an unsigned and undated manuscript provided to me by a descendant of his, George married Margaret Staley of Hagerstown on Oct. 4, 1860 and moved to Springfield, Illinois in April, 1861, the same month that the Civil War began.  He probably prepared the way for the rest of the family to follow.  Johann brought the rest of his family to Springfield, Illinois, in August 1862 a few weeks before the Battle of Antietam, on Sept. 17, 1862.  Probably fully aware of the risk of living in a border state, Johann mush have realized how Sharpsburg might be affected.  A town history posted on the Internet by the Sharpsburg Historical Society described the what happened: “The Battle and its aftermath in 1862 ravaged the area.  Crops, livestock and supplies were wiped out, though almost all of the houses remained standing, though scarred, burned and looted.  Two weakened churches were later demolished.  The armies returned again in 1863 and 1864, with much less fighting, but with great appetites, and the harvests were lost again.” 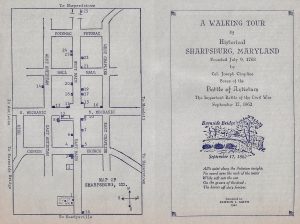 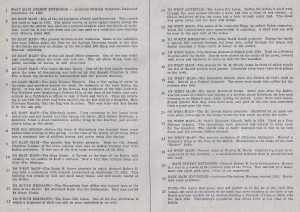 The Bolinger family lived on Hall St.  The photo below shows what the street looked like right after the Battle of Antietam.  The Bolinger house is hidden behind the tree in the center of the photo.  Note the Old Episcopal Church in the left background, the man standing near the fence in the lower left, the blurred image of a boy or man and a dog near the fence on the right, and a man on horseback in the distance.

The following photo of Hall St. was taken in 1963-64 from about the same location as the 1862 photo shown above except that it is a bit farther back.  The house with the olive green roof in the 1963-64 photo appeared to the photographer to be the same as the one with the slight sag in the roof in the 1862 photo.

For more on Johann Gottlieb (John G.) Bolinger, see the page Civil War and the Move to Illinois.